FEDOR EMELIANENKO AND RYAN BADER COLLIDE FOR THE BELLATOR WORLD HEAVYWEIGHT CHAMPIONSHIP ON JAN. 26 AT THE FORUM IN INGLEWOOD, CALIF. 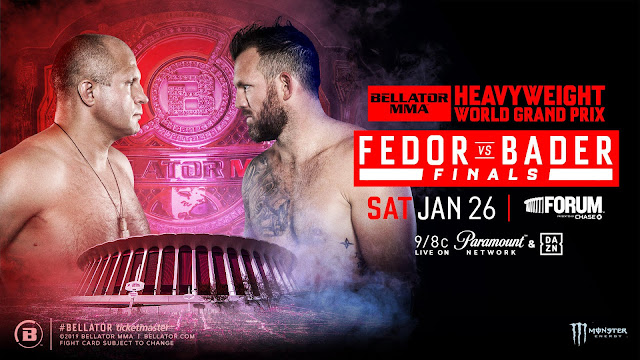 TICKETS FOR BELLATOR: FEDOR VS. BADER ON SALE THIS FRIDAY, OCT. 19

Tickets for Bellator: Fedor vs. Bader go on sale to the general public starting Friday, Oct. 19 at 10 a.m. PT and can be purchased at the Forum box office, as well as Bellator.com and Ticketmaster.com. A special Bellator Nation presale will take place Wednesday, Oct. 17 and Thursday, Oct. 18. The event will be broadcast live and free on Paramount Network at 9 p.m. ET/8 p.m. CT and will be simulcast live on DAZN. Preliminary action will stream on Bellator.com and globally on the Bellator Mobile App. Additional bouts will be announced in the coming weeks.

Fighting out of Stary Oskol, Belgorod Oblast, Russia, Fedor Emelianenko enters the Heavyweight World Grand Prix Finals on the heels of consecutive first-round knockouts over Chael Sonnen and Frank Mir in the tourney’s semifinals and opening round, respectively. A former PRIDE FC Heavyweight Champion and PRIDE 2004 Heavyweight World Grand Prix Champion, “The Last Emperor” is now one win away from claiming Bellator gold. Often referred to as “The GOAT” by fans around the world, his career resume stands as one of the most impressive in the history of the sport with victories over Antônio Rodrigo Nogueira, Mirko Cro Cop, Mark Hunt, Mark Coleman and Andrei Arlovski, to name a few. With 29 career victories ending via finish, the punching power and world-class Sambo of the stoic Russian could result in yet another accolade in his illustrious career.

Attempting to become a simultaneous two-division titleholder, Ryan Bader’s path to the rare achievement is nearly complete. In his quest to earn the moniker of “Champ-Champ” and cement his status in the pound-for-pound standings, the Reno, Nev.-native KO’d “King Mo” Lawal in 15 seconds and later dominated Matt Mitrione in the Semifinals of the Heavyweight World Grand Prix. Fighting out of Gilbert, Ariz., the former two-time NCAA Division I All-American wrestler from Arizona State University began his professional career with a 12-fight unbeaten streak and by winning season eight of The Ultimate Fighter. “Darth” continued his path of dominance by collecting victories over some of the 205-pound division’s top talent, including wins over former world champions “Rampage” Jackson, Rashad Evans, Phil Davis and Rafael “Feijão” Cavalcante, as well as Ovince Saint Preux, Vinny Magalhães and Linton Vassell. 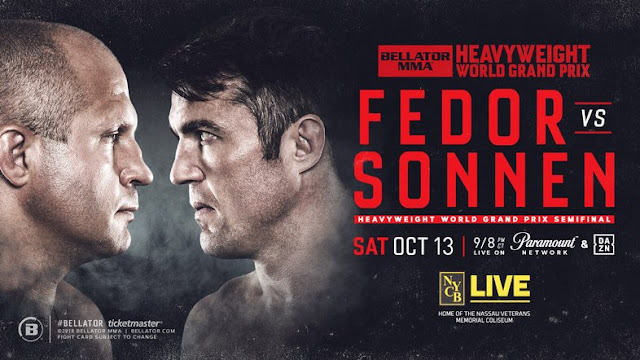 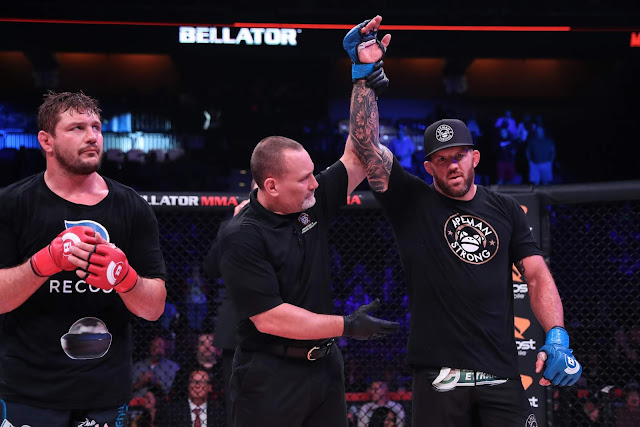 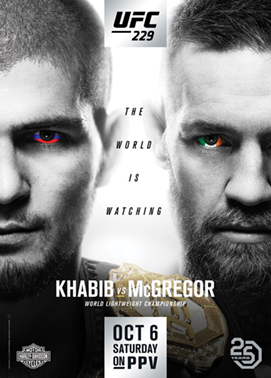 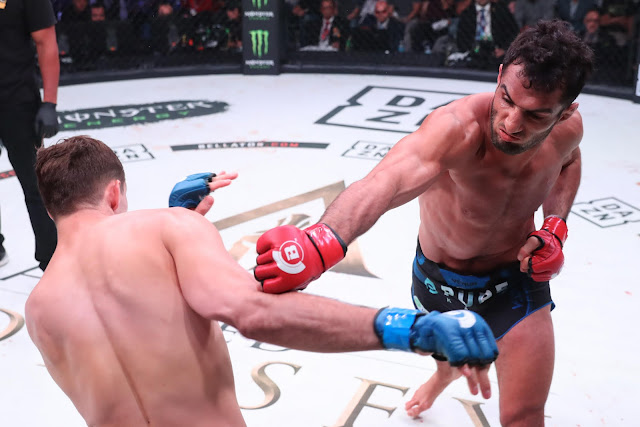 The Abu Dhabi King of Mats Heavyweight champion has now an official contender. Erberth Santos fought his way trough the toughest of competitions this Sunday, September 23, in Los Angeles. The Brazilian competitor fought 5 times to earn the right to challenge the champion at the 2019 ADWPJJC. Here's how the bracket ran in a day of insane action at the LA Convention Center.

Erberth Santos debuted on group A against Poland's Gerard Labinski, in a very tough match. One sweep early into the match was responsible for the narrow 2-0 lead that secured Erberth the victory. Santos' second challenge was against young talent Rudson Mateus. Erberth saw the right opportunity to squeeze a toe hold and get the finish. Erberth's third match put him against Jackson Sousa, in a very close match that was only decided by one advantage. Erberth finished his campaign against veteran Alex Ceconi and once again Santos was able to reach the mount and finish the fight with a wrist lock. Jackson Sousa won three out his four matches and also qualified to the semifinals. He beat Alex Ceconi 4-0, Gerard Labinski 2-0 and finally Rudson Mateus 2-0.

On Group B, GF Team's Ricardo Evangelista started out in great style with a toe hold finish on Tanner Rice. His second match was much tougher, as Evangelista was not able to put the breaks on a very active Guttemberg Pereira, who managed two sweeps to beat Ricardo 4-0. Evangelista followed to face Gracie Barra's Gabriel Arges. Again, one sweep early into the match was enough for a 2-0 lead and Ricardo's second victory The final match in Evangelista's campaign was against Poland's Adam Wardzinski. A 2-0 lead on advantages put Evangelista in the semifinals. The other qualified to the semifinals was Guttemberg Pereira, who won three out of four matches. He beat Ricardo Evangelista 4-0, and finally Tanner Rice 2-0.

The matchups in the semifinals would have been Erberth Santos vs. Guttemberg Pereira and Ricardo Evangelista vs. Jackson Sousa. Unfortunately a back injury prevented Guttemberg from continuing in the competition. With that, Erberth Santos advanced straight to the final. In the other semifinal, Jackson Sousa secure his spot in the final with a sweep and a 2-0 lead.
The final was a very close match with both Erberth and Jackson fighting hard for the best grip and the takedown that would put them ahead in the scoreboard. As the time passed, Erberth eventually pulled guard and tried to sweep as Jackson worked his guard pass. At the five minute mark, the score was still 0-0 and the referees decided unanimously in favor of Erberth. He now goes on to challenge Trans in 2019.
Posted by Kid Peligro at 2:10 PM 0 comments

ADULT MALE BLACK BELT
56kg – Jorge Nakamura fought twice to conquer the gold medal. He first beat Carlos Alberto da Silva 4-2 in the semifinals to meet José Carlos Lima in the gold medal match. A choke from the back was the weapon of choice for Nakamura to finish Lima and take the title.

62kg – João Gabriel de Sousa stepped on the mats three times on his way to the gold medal. He first beat Alexis Alduncin 4-2, then beat Pedro Clementino by referee decision to meet up with Hiago George in the final. The gold medal match was a close one. With one sweep, Gabriel was able to score the 2-0 lead that gave him the gold medal.

69kg – Gianni Grippo is back. The 2X ADWPJJC returned to compete at the Abu Dhabi Grand Slam and had no easy path to the title. He first beat Rafael Mansur by penalties and then outscored Thiago Macedo 2-0 on advantages. The final was a reedition of an well-known rivalry with Grippo facing Paulo Miyao. One sweep was enough for Gianni to build the 2-0 lead on points that secured him the title.

77kg – The most crowded division forced the champion to fight no less than four times to secure the gold medal. Caio Soares had no rest during his matches. He debuted with a 4-2 win over Michael Trasso, then beat Leonardo Lara 2-1 on advantages and met up with Alef Brito in the semifinal. A leg lock was responsible for taking Caio to the final. The gold medal match was against Victor Silvério and a tough one. After a 2-2 tie on advantages, the referees decided in favor of Caio in a split decision.

85kg – Manuel Ribamar made his way to the top of the podium in a three-match campaign. He first caught Mateo Tenzera with and armbar, then beat Diego Ramalho 2-1 on advantages. The final was against Rudson Mateus and after a 2-2 tie the referees decided in favor of Ribamar.

94kg – Gustavo Batista fought three times on his way to the gold medal. He first beat Anton Minenko 7-0 to face Adam Wardzinski in the semifinal. A 2-1 lead on advantages put Batista in the gold medal match, where he faced his teammate Kaynan Duarte. A sweep and a 2-0 lead granted Gustavo the title.

110kg – Erberth Santos had three matches to secure the gold medal. He first beat Matheus Felipe by one penalty and then beat Helton Jr 1-0 on advantages. The gold medal match was against Max Gimenes. Erberth found a toehold lock to finish his opponent and take the title.

49kg – Mayssa Bastos is still unbeatable in her division. In los Angeles, she finished Luna Barea twice with chokes from the back to win another gold medal.

55kg – Nathalie Ribeiro fought once on her way to the gold medal. In the final, she managed a last-second near sweep to score a 1-0 lead on advantages and secure the title.

62kg – Gabrielle McComb fought twice to claim her title in Los Angeles. She first beat Bianca Basílio 3-1 on advantages in a very tough match. The final was against Nicole Sullivan, also a very tough opponent. A 4-2 lead built with a sweep and a takedown put Gabi on the highest step on the podium.

70kg – Thamara Silva powered through the most crowded bracket in the female division. She first beat Alejandra Gonzales 1-0 on advantages. Then Raquel Paahuli was disqualified in the semifinals. The gold medal match was a tough affair against Samatha Cook. After a 0-0 tie, the referees decided in favor of Thamara, the new champion.

90kg – Gabrieli Pessanha retained he title in the division with an outstanding performance. She debuted with a 13-0 win over Shantelle Thompson. The semifinal was against ADWPJJC champion Nathiely de Jesus. In a very close and thrilling match, Gabrieli managed two sweep to build a 4-2 lead. The final obstacle for Gabi was the very talented Kendal Reusing. In a battle, Pessanha swept in the end to beat Reusing 2-0.

Abu Dhabi King of Mats
The action returns this Sunday, at 1:30PM, for the Abu Dhabi King of Mats. The heavyweight division will put ten of the best athletes in the world face to face in an all against all bracket where only the toughest one will come out victorious. The winner of this Sunday's bracket will take home $10,000 and the chance to unseat reigning champion Alexander Trans.
The Abu Dhabi Grand Slam Tour returns on November 16-18, in Rio de Janeiro, Brazil. Click here to register now.
Posted by Kid Peligro at 5:17 PM 0 comments 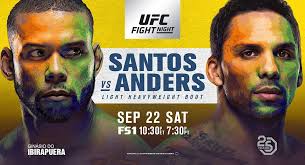 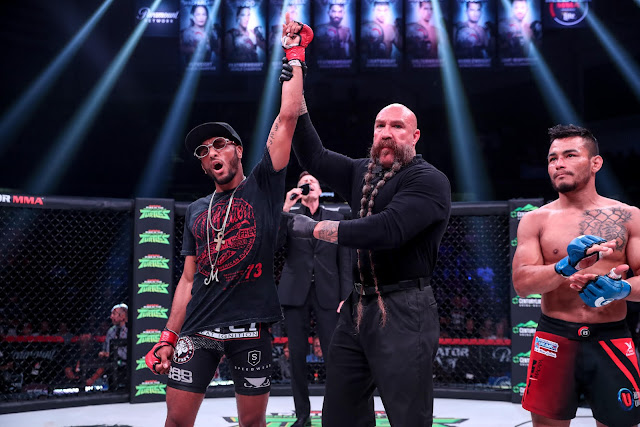 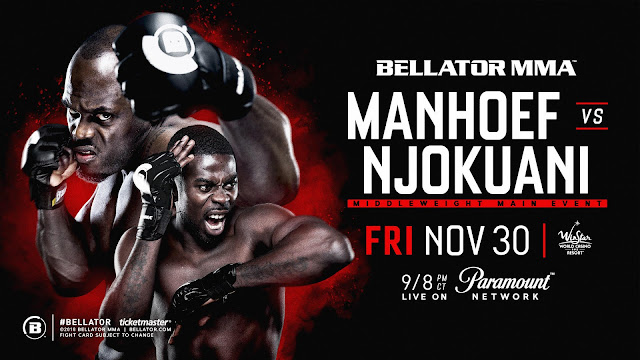 LOS ANGELES – Bellator heads back to WinStar World Casino and Resort on Friday, November 30 with a battle of heavy-handed middleweights, as combat sports-veteran Melvin Manhoef (30-14-1, 2 NC) takes on the dynamic Chidi Njokuani (18-5, 1 NC) in the main event of Bellator 210.

Tickets will go on sale to the general public on Friday, September 21 and can be purchased at the WinStar World Casino and Resort box office, as well as through Bellator.com and Ticketmaster.com.

Bellator 210: Manhoef vs. Njokuani will be broadcast on Paramount Network at 9 p.m. ET/8 p.m. CT and will stream LIVE on DAZN, while preliminary bouts will stream on Bellator.com and globally on the Bellator Mobile App. Additional bouts will be announced in coming weeks.

A former world title challenger, Manhoef returns to the Bellator cage looking to stake his claim in a suddenly crowded middleweight division. The famed Dutch kickboxer and mixed martial artist is known for his highlight-reel KO’s throughout his impressive combat sports career that spans two and a half decades, including successful runs in DREAM, Cage Rage and Bellator. With career wins over Mark Hunt, Kazushi Sakuraba, “Cyborg” Santos, and most recently for Bellator, Hisaki Kato, “No Mercy” has plans for adding another name to his lengthy resume.

Njokuani made his Bellator debut in the welterweight division with a decisive victory over Ricky Rainey in 2015. Since then, “Chidi Bang Bang” has notched impressive wins over Melvin Guillard and Andre Fialho. The Las Vegas fighter later announced himself to the 185-pound weight class in emphatic fashion with a victory over Hisaki Kato at Bellator 189. With 10 knockouts to his credit, the always-dangerous Njokuani looks to add another “W” to his record in November.