With the ADCC drawing near (Beijing, China October 19 & 20) , here is Kid Peligro's UNOFFICIAL ADCC 2013 competitors list. The list has been carefully compiled with the best information available and should be pretty solid with Championship/trial winners and officially invited competitors but it IS NOT the ADCC Committee's list as some names were confirmed by the athletes themselves.

The U77KG is now wide open with defending and multiple times champion Marcelo Garcia bowing out for this edition of the event . So an exciting list is being compiled. Check out the names below: 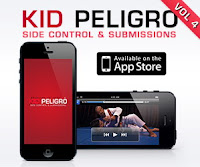