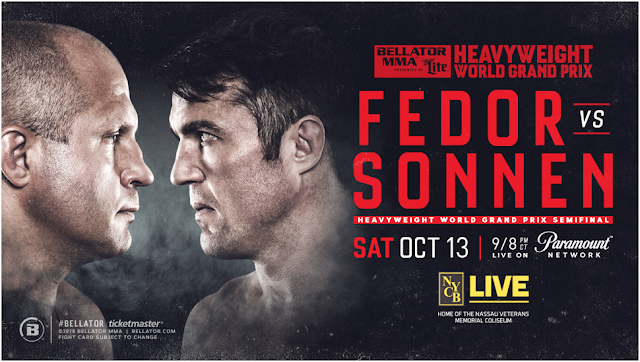 TICKETS FOR BELLATOR 208: FEDOR VS. SONNEN ON SALE THIS FRIDAY, JULY 27

LOS ANGELES – The greatest heavyweight of all time Fedor Emelianenko (37-5, 1 NC) will battle the trash-talking Chael Sonnen (31-15-1) in the second semifinal of Bellator’s Heavyweight World Grand Prix. The highly anticipated matchup will emanate from NYCB LIVE, home of the Nassau Veterans Memorial Coliseum in Uniondale, N.Y., a mere 24 hours after Matt Mitrione takes on Ryan Bader on the opposite side of the bracket.

Tickets for Bellator 208: Fedor vs. Sonnen are available 24-hours early through a special Bellator Nation pre-sale running exclusively on Thursday, July 26. Tickets will go on sale to the general public Friday, July 27 at 10 a.m. ET and can be purchased at the NYCB LIVE box office, as well as Ticketmaster and Bellator.com. Please note that tickets are not available at the box office on the first day of public on sale.

The event will be broadcast LIVE on Paramount Network at 9 p.m. ET/8 p.m. CT on Saturday, October 13 and will stream LIVE on DAZN, while preliminary action will stream on Bellator.com and globally on the Bellator Mobile App. Additional bouts will be announced in coming weeks.

Fighting out of Stary Oskol, Belgorod Oblast, Russia, Fedor will enter the Bellator MMA cage for the second time this year, and third time overall, when he takes on Sonnen in the Bellator Heavyweight World Grand Prix semifinals on Saturday, Oct. 13. The sambo fighter looks to build off of his impressive knockout victory over Frank Mir (18-12) at Bellator 198, which came just 48 seconds into the bout. A former PRIDE FC Heavyweight Champion and PRIDE 2004 Heavyweight World Grand Prix Champion, “The Last Emperor” now has his eyes set on the Bellator MMA Heavyweight belt; a title that he is merely two wins away from. With 28 of his 37 career victories ending in a finish, Emelianenko will undoubtedly pursue yet another highlight-reel knockout when he squares off with “The American Gangster” for a place in the World Grand Prix final.

Hailing from West Linn, Ore., Sonnen is fresh off his first-round victory over “Rampage” Jackson at Bellator 192 in the opening round of the Bellator Heavyweight World Grand Prix earlier this year. With other notable wins over the likes of Wanderlei Silva, Michael Bisping and “Shogun” Rua already under his belt, Sonnen now hopes to add the legendary Fedor to his brilliant resume of renowned victories. After jumping up in weight class to compete in the biggest tournament in the promotion’s history, the former University of Oregon wrestler doesn’t seem to have lost a step. Sonnen will look to join the select few who have ever been able to dethrone Emelianenko when he enters the cage on Oct. 13 at NYCB LIVE.

*Card subject to change.
Posted by Kid Peligro at 8:01 PM