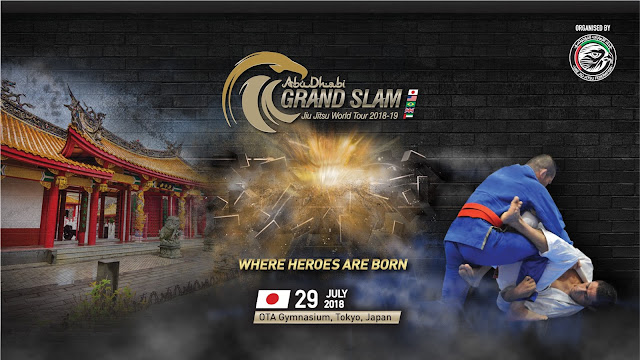 “It is an honor for me to represent Japan at the Abu Dhabi Grand Slam here in Tokyo. The Legends series in the UAEJJF events is very prestigious and invitational, so to be invited, I am really excited to face Vitor Shaolin, he has achieved everything in Jiu-Jitsu and MMA and it will be a thrilling match no doubt.” Said Daisuke Sugie

“This will be my third time at the Legends series but fist time outside of Abu Dhabi, so that is a new experience, and to do it against one of the best in Japan, Daisuke, it a moment of pride. All I can say is, it will be a special match for sure and I would like to thank the UAEJJF for their first class organization and hospitality.” Vitor Ribeiro

The Abu Dhabi Grand Slam Tokyo® will feature some of the top players in the sport, including Mayssa Caldas, Amal Amjahid, Bianca Basílio, Nathiely Melo, Paulo Miyao, Tiago Bravo, DJ Jackson, Kaynan Duarte, Rudson Matheus, Guttemberg Pereira, João Gabriel Rocha, Gerard Labinski and more who will look into adding points in their UAEJJF ranking and also compete for their share of over US$120,000 in prizes.

The 2018/2019 season of the Abu Dhabi Grand Slam® Jiu-Jitsu World Tour kicks off July 29, at the OTA Gymnasium, Tokyo, Japan. The registrations deadline is on 24th July.

Further details on ABU DHABI GRAND SLAM® JIU-JITSU WORLD TOUR will be announced in coming weeks. Keep up to date with all the latest news by following @ADWJJT on Instagram, Facebook and Twitter.