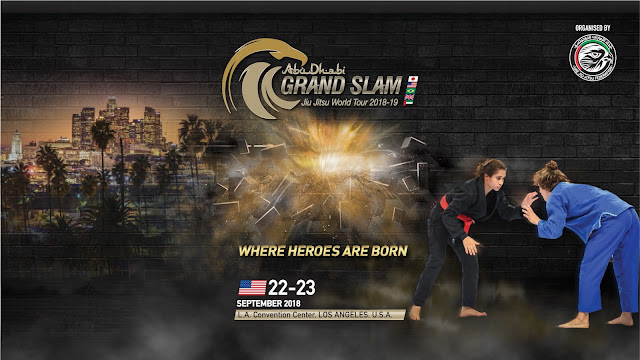 The Abu Dhabi Grand Slam® Los Angeles will be held at the LA Convention Center on 22nd September.

Los Angeles, USA, 29thAugust, 2018: The UAE Jiu-Jitsu Federation®, the official authority for the sport of jiu-jitsu in the United Arab Emirates, announces the second leg of the most prestigious jiu-jitsu world tour, to be held in Los Angeles on 22nd September at the LA Convention Center.

With $120,000 in cash prizes, the Abu Dhabi Grand Slam® is open to all nationalities, the medalists will be listed in the jiu-jitsu world rankings. The top three academies will also receive cash prizes and top ranked competitors will receive prizes at the end of the season according to the UAEJJF World Ranking.

Abu Dhabi King of Mats® Second Edition, which brings together many of the greatest fighters in the Abu Dhabi World Professional Jiu-Jitsu Championships history, will be held on the following day on 23rd September at the LA Convention Center in Los Angeles. One of the most prestigious invitational-only tournaments in the sport of jiu-jitsu, which is usually held in three different weight divisions, but in LA it will only be held in the heavyweight division.

With $42,000 in cash prizes for 10 of the top names in the heavyweight division and a super match in the next Abu Dhabi King of Mats® Second Edition - between reigning champion, Alexander Trans and the champion from the Second Edition for the Heavyweight Belt.

Here is how the cash prizes will be awarded for the Abu Dhabi King of Mats® champions:

“Season 4 of the Abu Dhabi Grand Slam® broke all of our previous records the numbers are rising each time from one event to another, which is a testament of how this sport is rising in all corners of the world. We are also very excited to bring the Second Edition of the brand of Abu Dhabi King of Mats® to Los Angeles, as the response from the top names to compete in it has been overwhelming.” Said Mr. Tareq Al Bahri, Director of the Abu Dhabi Grand Slam®

“I would like to thank our sponsors and partners; EMAAR, Abu Dhabi Sports, Abu Dhabi Tourism, ADNOC and Palm Sports. I would also like to thank all of our 26 TV partners, especially to the ones in new territories like India and the Caribbean” Said Mr. Tareq Al Bahri.

For the Abu Dhabi Grand Slam® Los Angeles, medals will be awarded for the 1st, 2nd, and 3rd places in each division. Prize money awarded will range from $500 to $2,500 in several categories, including juvenile, adult and masters, from blue, purple, brown and black categories for both men and women.